How to Be Good at Small Talk: a Guide for Men

The skill of small talk can come in handy in the most unexpected situations, from a party, when you meet someone new, to a job interview or even a business lunch. It may seem that there’s nothing easier than to have a chat about nothing. But for some reason, for many of us, keeping a conversation going is pretty hard. And while we awkwardly stare at our companion, trying to come up with a bad joke to break the ice, others use their charisma to steal all their attention. So, how to small talk?

What is small talk?

You make small talk more often than you think because even business negotiations consist of its elements. Let’s try to define small talk. It’s an easy, entertaining conversation between people who usually don’t know each other. But even close people, like friends or relatives, often have small talks. Its main difference from a normal conversation is that it’s neutral and doesn’t touch upon deeply personal, intimate topics, nor does it address serious problems.

Why do we need small talk?

When we’re next to a stranger, for example, on a train, in a doctor's office, or an elevator, we start chatting with them eventually even if we know that we’ll never meet this person again. At the beginning of business negotiations, there’s also always a short, 3-5-minute casual conversation about something neutral and not related to the main topic of discussion. Why do we do this?

First of all, small talk helps us establish contact with our interlocutors. We can’t just say hello and immediately start discussing something serious, as everyone engaged in a conversation will feel uncomfortable. Making small talk, you show attention to people you’re talking to and establish a friendly relationship by discussing a topic that all your companions can chat about. As a result of such a conversation, the interlocutors adjust to each other’s mood. This is important because when a conversation starts, someone may still be occupied by their own thoughts, someone may want to know the interlocutors closer, and others may be too shy to say the first word. During the introductory conversation, the participants are on the same page, which allows them to avoid possible conflicts that often arise because of the difference in moods. A five-minute small talk allows you to establish a trusting relationship with the person you’re having a chat with.

In addition, small talk is perfect for filling awkward pauses. It's also a nice way to kill time – that's why we’re more eager to start a short conversation when we’re waiting for something. Some people do this simply out of politeness, but their goal is the same – to create a friendly atmosphere, comfortable for both interlocutors.

But what can we talk about, and what topics should be avoided? Small talk must be neutral, calm, and easy. Interlocutors shouldn’t go deeper into scientific, philosophical, political, medical, and other problems, in order not to provoke disputes. Don’t express your opinion too categorically, especially if it’s negative. 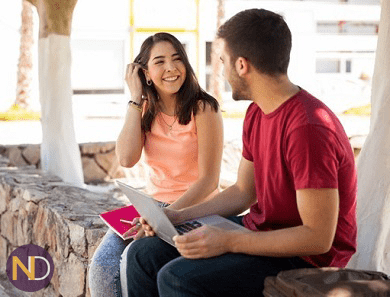 Good topics are sports, hobbies, cultural or other interesting events, movies and books, travel, local landscapes, attractions, or pets. Sometimes you can talk about your profession, but make sure that this conversation is entertaining and unobtrusive. You don’t want your companions to get bored. And, of course, one of the most popular small talk topics is the weather.

But there are things that can’t be discussed, like questions that are absolutely inappropriate no matter what kind of company you’re in at the moment. This applies to the age of the interlocutor, their salary, and personal life.

It’s also not polite to talk about illnesses, problems, grief, death, conflicts, and family affairs. Avoid talking about politics, as well as intimate and religious topics, especially if you don’t know your companion’s views on the question. For instance, if you want to make small talk sexy, you need to be sure that the girl you’re talking to is sexually interested in you. Don’t talk about other people’s weaknesses and shortcomings. Don’t speak ill of your friends who’re not present at the moment. Never ask the interlocutor about their age or job rank, and don’t ask for professional advice from a specialist if you’re talking to one – it's also considered indecent. And the last but not least, a well-mannered person tries to talk less about himself.

There are questions that will help you attract the interlocutor’s attention and make them believe that you’re really interested in knowing them better (even if you’re not).

What excites you at the moment?

There are a lot of possible directions for this question, including personal and work life. But it’s more important that it implies dozens of different answers that you may later use to keep the conversation going.

May I ask you about your plans for the future?

Just like the previous one, this question allows your companion to choose from a variety of answers which will give you more small talk ideas.

Do you have any places you hate? What are they?

Well, maybe the question doesn’t sound that positive, but there’s a high probability that the answer will be hilarious. And it’s also a great way to get inside someone’s head quietly. Some may tell that they don’t know a place worse than a dentist office, but one of your interlocutors may recall some funny story about having a fight with two goats in a contact zoo. This definitely won’t lead your conversation to a dead end.

So, you’re from Boston/NY/Denver/whatever, right? What’s the best thing I should do when I’m there? That’s also one of those small talk questions that don’t actually mean anything but make your interlocutor feel like they’re helpful and smart.

What awesome non-work projects are you working on at the moment?

With this question, you show that you’re not going to bother your companion with anything related to your work, and you want them to do the same. But you’d love to know about their hobbies because you’re really interested in them and this conversation. Besides, we get inspiration from hearing about people’s achievements, and, perhaps, this small conversation gives a boost to your ideas.

Questions you should never ask

But there are also questions that can’t be asked when having small talk. Here are a few of them.

So, are you planning on having kids?

If you found yourself talking with a married couple, it may seem that the topic of children is safe. It’s totally wrong. Many couples have problems conceiving or just try to delay this joyful moment. And if you’re having a chat with the girl you’re dating, questions like this will make you sound like a weirdo. Find a better thing to discuss. Moreover, you’re probably not interested in this topic anyway.

The art of small talk is a tricky thing, and it’s not the best idea to start guessing which of your interlocutors are relatives. Sure, it's impossible to confuse a sister with a brother, but it's very easy to call your companion’s sister a daughter, thus letting the companion assume that she looks older than she is. That’s why you should avoid related questions.

How long have you been dating?

If you want to win the attention of a couple, you should keep this question to yourself. They may not be dating at all. Maybe they just decided to go to the party together because they knew that there would be many guests asking inappropriate questions and didn’t want to go through them alone. If you’re really interested in the story of the couple you’re talking to, better ask “How long have you known each other?” or “How did you meet?”

Such a question can greatly hurt a woman's feelings, especially if she’s not pregnant. If a woman wants to let you know that she’s pregnant, she’ll do it herself.

Here’s how to master small talk and make a good impression on your interlocutor.

Start a conversation with something neutral

Psychologists say that it’s much easier to start a conversation with neutral topics related to the surrounding reality. And these are usually weather or the place you’re at. Look around, comment on the interior, music, and maybe even some of the guests.

The first contact must be established with the eyes. Each of us has a personal zone strangers are better not to invade. During the conversation, make sure that there’s enough distance between you. And it's better to avoid touches and other intrusions into personal space that you can afford when communicating with friends and family.

Often people get stuck at the initial stage of the conversation. If no one can develop the dialogue further, awkward pauses occur. We try to fill them with jokes which only make things worse. What can you talk about after you’ve discussed the weather? You should prepare for this in advance. If you go to an art exhibition, it would be nice to spend at least 30 minutes studying the subject of the exhibition. You can present some little-known facts to the interlocutor with the phrase “Did you know that...” After that, the conversation will continue. And having a couple of small talk examples in stock won’t hurt, too.

Don’t leave the house without fresh news. The Internet allows you to be a well-versed interlocutor. When searching for news, visit proven sites to make sure that the information you get is reliable. It’s better not to discuss rumors.

How to be good at small talk? Instead of questions that can only be answered with “yes” or “no” and lead to a dead end, try to get your interlocutor to tell you more about their life. As a rule, questions that require a detailed answer bring the conversation to a new level. For example, instead of asking the guest at the party “Is your family here too?”, it is better to ask “How did you meet the host of the party?”

Don’t be shy to show the interlocutor that you’re familiar with what they tell you. It forms a kind of connection between you. For example, if your companion told you that they used to live in another country, and you also spent several years abroad, tell a couple of stories about how it was. Most likely, your interlocutor will also want to share their memories with you.

This is one of the main small talk tips. Some of us are so terribly afraid of destroying the conversation with pauses that they begin to comment on everything that they see and hear non-stop. And some go even further - they start shooting jokes one after another. But no one likes talkers, and endless jokes and witticisms in an unfamiliar company may look inappropriate and strange. But everyone loves the grateful listener. So consider this and know how to maintain a delicate balance between silence and chattering.